Hanaa Malallah | From Figuration to Abstraction

Hanaa Malallah returns for her third solo exhibition at The Park Gallery with the most ambitious show of her work to date, charting her emergence as one of the foremost artists in Baghdad in the 1980s & 1990s.

Malallah’s artistic instincts were evident as a rebellious but talented teenager who was selected for submission to the Baghdad Institute of Fine Arts at the age of 14, where she would receive a general education in art for two years before gaining a diploma in printmaking under Rafa Al Nasiri. At the age of 16 she became interested in abstract art, having first seen and become deeply intrigued by Shaker Hassan Al Said’s work. From 1983 to 1988, Malallah studied for a Bachelor’s in fine art with a specialisation in oil painting, her belief being that in order to become an abstract artist, she would first have to learn to master oils and realist painting.

The exhibition brings together a small group of portraits and self-portraits from the late 1980s and early 1990s, and abstract works on canvas and paper executed between 1988 and 2002 in Baghdad. Malallah has been painting self-portraits since she was an adolescent and continues to do so up to this day, finding a sense of mystery in the process. Although many of these were looted from her home in Baghdad after she was forced to flee the country in 2007, four excellent examples are present here. She would also paint people she encountered in day-to-day life. The Guard (1991) is a seminal large-scale painting which hints at the increasingly abstract path her technique would soon follow. Here we see both her masterful control of oils in the sensitive treatment of the subject – a security guard at the National Museum of Iraq – as well as her increasingly abstract motifs in the representation of the artefacts that flank him. Many antiquities such as these were looted in the immediate aftermath of the 2003 invasion of Iraq, from the museum that was formative to the young artist’s development in her frequent visits there.

By 1990, Malallah had begun to focus on abstraction, marking the beginning of a period of great creativity. This manifested itself particularly in her interest with symbols, apparent in the group of mixed media and canvas works presented here. Sketch of Alwaarka Wall Temple Artwork (1991) makes repeated use of the Phoenician symbol Ayn (eye), a letter that exists in Arabic and Hebrew to this day (and from which the Latin O is derived). The carefully ordered circular symbols and the missing spaces are early hints at the artist’s fascination with the relationship between order and chaos, a sentiment which reflected her existence in a turbulent environment. This interest in symbols would later lead the artist to complete a PhD in Philosophy of Painting in 2005, with her thesis on ‘Logic Order in Ancient Mesopotamian Painting’. UN sanctions imposed against Iraq in August 2000 marked the beginning of the artist’s engagement with mixed media and found objects, central to her work even today. The Tickets (1991) and Street (1993) are at once autobiographical and indicative of her lack of access to proper artist’s materials.

In the late 1990s, Malallah was effortlessly combining elements of symbolism, spirituality, historical documentation and a sense of ruin in her work. This is best illustrated in Pattern II (1999) and Pattern III (2002). These works bear heavy references to God, heaven and the woman, or female, through her use of Sumerian symbols. Untitled (1994) and Untitled II (1995) are two of the first works to incorporate the burning of canvas and are rich with further cuneiform symbols.

The turmoil of the 1980s and 1990s in Iraq was fundamental to the development of Malallah’s practice, who along with ten other prominent artists, collectively known as the Eighties Generation, chose to stay in the country during the Iran-Iraq war (1980-1988) and the Gulf War (1990-1991). Severe travel restrictions, economic hardship and social instability, not to mention the horror that accompanies war, radically affected the creative output of these artists. The technical complexity and historical significance of her oeuvre of this period is key not only to understanding Modern Iraqi Art of the late 20th Century, but also Hanaa Malallah’s work in the present day.

Hanaa Malallah was born in 1958 in Thi Qar Province, Iraq. She studied under the guidance of Iraq’s ‘Pioneer’ generation of artists, including Faik Hassan and Shakir Hassan al Said, who were instrumental in bringing western modernism to the country. In the 1990s she began to teach, lecturing at the Institute of Fine Arts at the University of Baghdad. She later became the director of the Graphics Department in Institute of Fine Arts and remained in that post until she left Iraq in 2006 after receiving death threats from militias. Upon leaving Iraq, she held an artist residency at the Institut du Monde Arabe in Paris, after which she was awarded a fellowship by S.O.A.S. in London in 2008. Following this, she was invited to take up a fellowship at the Chelsea College of Art in London for three years. She is currently based between London and Manama, where she is associate professor of art at the Royal University for Women, Bahrain. Solo exhibitions include Baghdad: Geography People Symbols, Centre for Arts, Baghdad (1993) and Vivid Ruins, The Mosaic Rooms, London (2009). Group exhibitions include Contemporary Iraqi Art, Institute du Monde Arabe, Paris (2000); Tawashujat: Between Poet and Artists, The Jordan National Gallery of Fine Arts, Amman (2003); Iraqi Artists in Exile, Station Museum of Contemporary Art, Houston (2008-2009) and Age of Terror: Art Since 9/11, Imperial War Museum, London (2017). Her works are in major museums and collections worldwide, including the Royal Jordanian Museum, the British Museum, Mathaf: Arab Museum of Modern Art and Barjeel Art Foundation. 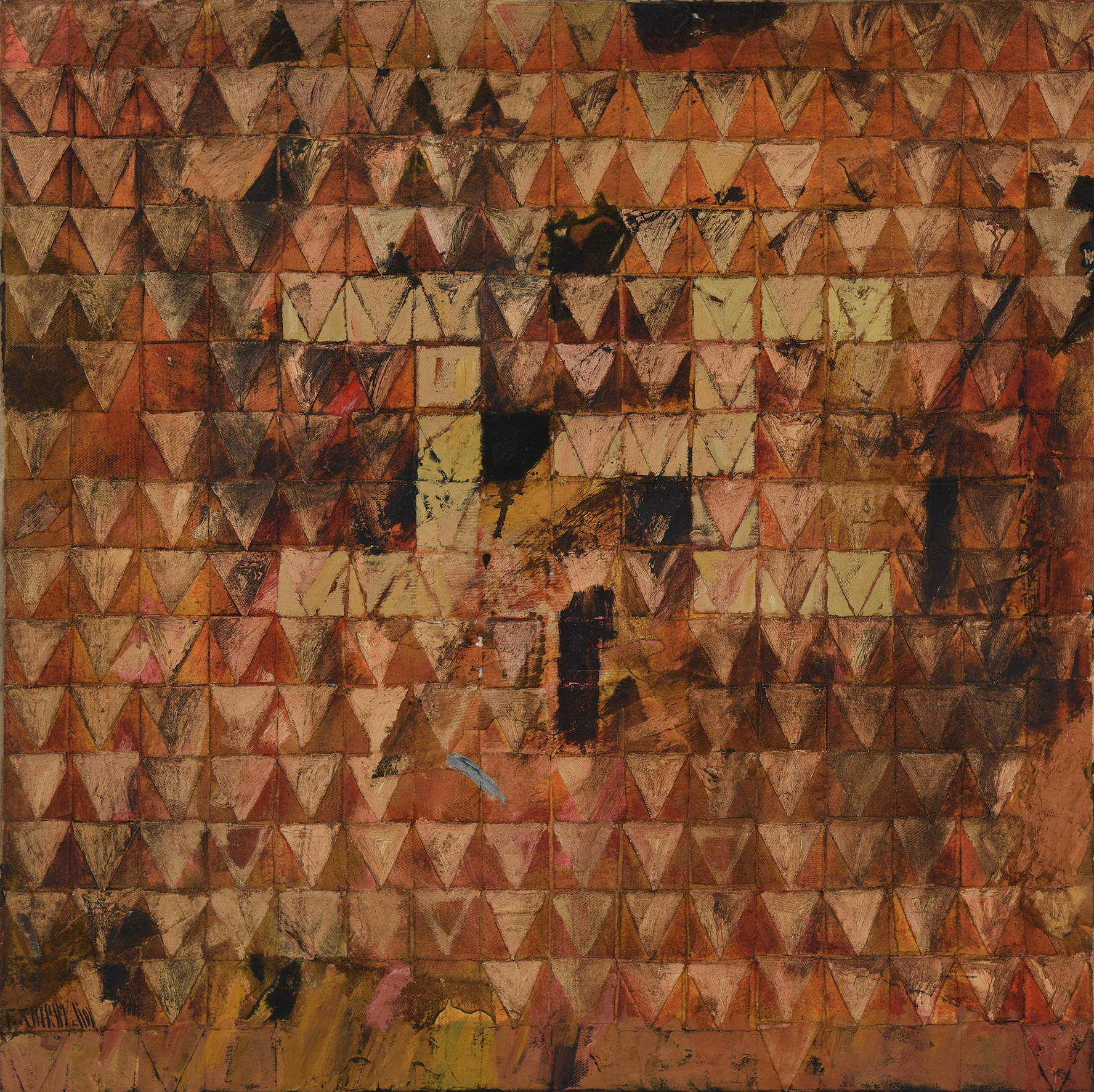